A decision has finally been made on which of the competing Australia/ New Zealand and South Africa bids will host the Square Kilometer Array. And it seems to be a clever compromise. The square kilometer array (SKA) will now be the 2 square kilometer array. The part of the planned array that will study the fundamental nature of gravity and make detailed images of individual objects will be built in South Africa. Another part of the array, which will be optimised to study the composition and history of the universe through wide sky surveys, will be built in Western Australia.

To meet the goals of the array it will need to cover the range of radio wave from 70 MHz to over 10,000 MHz and it was never going to be possible for a single type of antenna to cover all of it. The low frequency component, consisting of receivers that do not move and cover the whole sky at once, will be built in Australia to take advantage of the 'radio quietness' of the Murchison site in WA. The MeerKAT array of steerable telescopes in South Africa's Karoo desert, will be extended to cover the high frequency range.

Another piece of the array is the technology that will allow the telescopes a wide field of view that has been compared to a fish-eye lens on a camera. This 'phased array feed' technology is currently being developed in Australia and New Zealand, but is most likely going to be installed on the South African telescopes.
Posted by Mostly Open Ocean at 1:59 PM No comments: Links to this post

I almost missed another day! But, I didn't panic.

A towel, it says, is about the most massively useful thing an interstellar hitchhiker can have. Partly it has great practical value. You can wrap it around you for warmth as you bound across the cold moons of Jaglan Beta; you can lie on it on the brilliant marble-sanded beaches of Santraginus V, inhaling the heady sea vapours; you can sleep under it beneath the stars which shine so redly on the desert world of Kakrafoon; use it to sail a miniraft down the slow heavy River Moth; wet it for use in hand-to-hand-combat; wrap it round your head to ward off noxious fumes or avoid the gaze of the Ravenous Bugblatter Beast of Traal (such a mind-bogglingly stupid animal, it assumes that if you can't see it, it can't see you); you can wave your towel in emergencies as a distress signal, and of course dry yourself off with it if it still seems to be clean enough.

More importantly, a towel has immense psychological value. For some reason, if a strag (strag: non-hitch hiker) discovers that a hitch hiker has his towel with him, he will automatically assume that he is also in possession of a toothbrush, face flannel, soap, tin of biscuits, flask, compass, map, ball of string, gnat spray, wet weather gear, space suit etc., etc. Furthermore, the strag will then happily lend the hitch hiker any of these or a dozen other items that the hitch hiker might accidentally have "lost". What the strag will think is that any man who can hitch the length and breadth of the galaxy, rough it, slum it, struggle against terrible odds, win through, and still knows where his towel is, is clearly a man to be reckoned with.

Hence a phrase that has passed into hitchhiking slang, as in "Hey, you sass that hoopy Ford Prefect? There's a frood who really knows where his towel is." (Sass: know, be aware of, meet, have sex with; hoopy: really together guy; frood: really amazingly together guy.)

Douglas Adams, The Hitchhiker's Guide to the Galaxy
Posted by Mostly Open Ocean at 10:52 PM No comments: Links to this post

Email ThisBlogThis!Share to TwitterShare to FacebookShare to Pinterest
Labels: humor

I missed out on World Turtle Day, but the city of Los Angeles gave turtles a small gift. The LA City Council voted 13 - 1 in favour of banning plastic bags on Turtle Day. Turtles are known to eat plastic bags, perhaps mistaking them for jellyfish, and this can lead to their death. A while ago I wrote about the general problem of plastic in the ocean, if you're interested in learning more that's a place to start.
Posted by Mostly Open Ocean at 12:18 PM No comments: Links to this post

Winning at hide and seek in the mesopelagic

A paper published a few months ago in Current Biology serves to highlight just how amazing cephalopods (squid, cuttlefish, octopus and their kin) are. The paper concerns how two species of cephalopods (Japetella heathi an octopus and Onychoteuthis banksii a squid) have evolved to avoid predators in the dynamic light environment of the mesopelagic layer of the open ocean.

The mesopelagic layer of the ocean extends from 200 meters to 1000 meters deep. Sunlight in this zone transitions from present, but too dim for photosynthesis at the top, to totally absent at the bottom. This light transition poses a tricky problem for animals living there that want to avoid being eaten.

In the shallower parts of the mesopelagic, predators are able to detect the shadows of prey swimming overhead. Here, the best strategy for small animals to reduce the risk of being eaten is for them to be translucent. Tissues that allow light to pass through cast a weaker shadow, which means that predators have to get closer to their prey in order to see them.

In the deep dark depths, translucence is not such a good strategy. There's not enough sunlight for predators to hunt for shadows. Some predators, though, bring their own light in the form of light organs near their eyes. In the directed light of bioluminescence small imperfections in light transmission cause the light to be scattered making translucent animals much brighter than the background and easy prey.

Where some predators, like the headlight fish (Diaphus effulgens), hunt by producing their own light, it pays to be a colour that absorbs light at the same wavelengths. The vast majority of bioluminescent organisms produce light in the blue wavelengths, which is best absorbed by reds and blacks. Unsurprisingly then, most animals that occur where sunlight is absent are red or black to reduce the risk that predators will find them using biologically produced light.

But, some animals, like our two species of cephalopod, range over most of the mesopelagic and encounter a wide variety of light environments. High on the wish list for such animals would be the ability to become translucent in diffuse sunlight and red in directed bioluminescent light. And it turns out that this is exactly what J. heathi and O. banksii can do.


Most of the time J. heathi and O. banksii are translucent, but when they are exposed to blue light, like that produced by bioluminescent organs, they rapidly change colour to red. Neither strategy is complete; the chromatophores reduce translucence even when contracted and they are not numerous enough to allow them to become totally red. Thus, I would guess that these cephalopods are at a disadvantage relative to organisms that specialize in being red or translucent. But, in contrast to the these cephalopods, such specialists would be limited in the light environments that they could use.

Interestingly, the images seem to suggest that J. heathi, which has the deeper distribution, is more able to produce the red colouration that is advantageous where predators hunt using bioluminescence. The authors, however, do not test or discuss this possibility. In the article they do briefly mention that older J. heathi are more common at deeper depths and have greater chromatophore coverage. So, the apparent difference in chromatophore coverage between the two species could be a consequence of either age or depth distribution differences, or perhaps both.

Who knew there was a World Turtle Day? I didn't until today, which is unfortunate as it was marked yesterday. But, I hope that Turtle Day was grand for all those who took part. The rest of us will have to put it in our diaries for next year.
Posted by Mostly Open Ocean at 2:45 PM 1 comment: Links to this post

Email ThisBlogThis!Share to TwitterShare to FacebookShare to Pinterest
Labels: turtles


It turns out that many of the nutrients that plankton need are in bird poo, which is also known as guano. Offshore of the places that birds nest can be higher in these crucial nutrients as the rain washes them out of the guano and into sea. When land use changes, so that birds no longer nest where used to also causes manta rays to become much less common out to sea.


Carl Zimmer, who is one of the best science journalists in the world today, has written an excellent piece about the connections between life on land and life in the sea. Much of it concerns a new study that documents the changes in manta ray populations with changes in land use. You should go and read it.
Posted by Mostly Open Ocean at 11:07 PM No comments: Links to this post

Someone's wrong on the internet!

The latest comic on XKCD contains mistakes that only a pedant would point out... 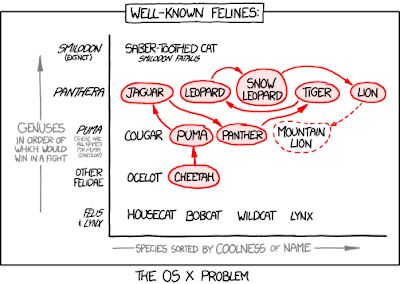 The plural of genus is genera, not genuses! Also, the title panther is incorrectly applied to Puma concolor since black forms of this cat, which warrant the title, have never been documented. Finally, tiger is clearly a cooler name than lion.
Posted by Mostly Open Ocean at 2:49 PM No comments: Links to this post

Email ThisBlogThis!Share to TwitterShare to FacebookShare to Pinterest
Labels: humor

I've not been able to post much over the last couple of weeks because of demands on my time in the 'real world'. However, deadlines have been met and things should be returning to normal here.
Posted by Mostly Open Ocean at 11:19 AM No comments: Links to this post