Anomalocaris is a strange and interesting genus. So strange, in fact, that three separate parts of their fossils were once identified as three separate creatures. It took nearly a century from the discovery of the first piece, for Anomalocaris canadensis to be properly identified and unified into single animal1.

Anomalocaridids, the group in which Anomalocaris belongs, grew to over a meter in length. Although small in comparison to marine animals today, at the time they swam the oceans (see an animation), between 540 and 472 million years ago, they were the biggest predators in the sea by far1,2.

Anomalocaridids had two segmented tentacle-like appendages that were probably used in hunting, perhaps by stabbing or by grasping prey. Their mouth was circular and had ‘teeth’ that closed like a camera shutter. Some of them may have eaten hard-bodied animals like trilobites, but it is thought that soft-bodied animals were their primary prey.

A paper published recently now shows that they also were likely to have had excellent vision3. The exquisitely preserved remains of Anomalocaris eyes discovered in the shale deposits at Emu Bay on Kangaroo Island in South Australia, show surface details for the first time. The compound eyes are pear-shaped and contain at least 16,000 individual lenses, which would give the animal a visual acuity comparable to that of modern day, active insect predators (e.g. dragonflies).

The most exciting thing about this find is that it pushes back the origin of arthropod eyes. The arthropods are the phylum containing the insects, crustaceans and spiders among other less well-known examples. The Anomalocaridids are a stem-group of the arthropods (i.e. Arthropod-like early relatives, but not direct ancestors of 'true' Arthropods). The presences of compound eyes in Anomalocaridids suggests that they evolved in the common ancestor to the Anomalocaridids and the groups containing the younger Arthropods. This implies that compound eyes evolved before the features that define the true Arthropods, such as a hardened exoskeleton and jointed appendages. 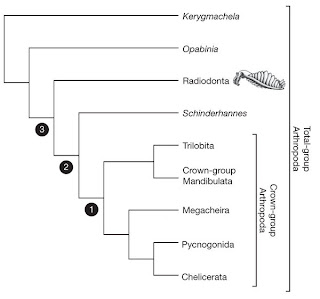 In the figure above the '3' indicates the unknown common ancestor to the Anomalocaridids (Order Radiodonta) which likely possessed compound eyes. The Opabina are known to have stalked eyes, but evidence that these were compound is currenlty lacking.