In September 1977 the Voyager 1 probe was launched. Its primary mission was to study Jupiter and Saturn, which it completed in late 1980. It took some fantastic photos of Jupiter, Saturn and their moons. Like this one of Jupiter's red-spot. 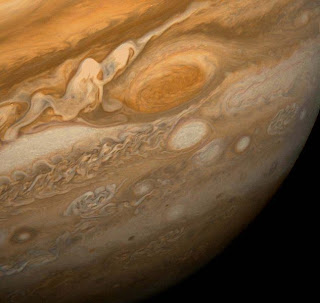 A decade after passing Saturn, Voyager 1 was beyond Pluto and headed for the edge of the Solar System, where it is now. At the request of Carl Sagan, Voyager 1 took this picture: 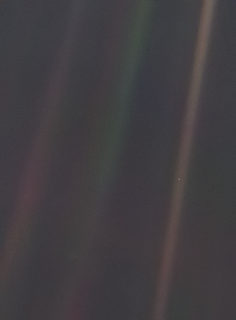 At first glance it's a boring image of black space with brown bands of sunlight reflecting off dust. But, it is actually an image that I find awe inspiring. If you look about halfway down the right-most band of brown, you'll see a tiny speck of pale-blue. That's Earth. In this image, which contains 640,000 pixels, Earth is little bigger than one tenth of a pixel. In the vastness of the universe our little planet is completely insignificant. But, Carl Sagan saw something in the image that was significant. In his book 'Pale Blue Dot' he wrote:

From this distant vantage point, the Earth might not seem of any particular interest. But for us, it's different. Look again at that dot. That's here. That's home. That's us. On it everyone you love, everyone you know, everyone you ever heard of, every human being who ever was, lived out their lives. The aggregate of our joy and suffering, thousands of confident religions, ideologies, and economic doctrines, every hunter and forager, every hero and coward, every creator and destroyer of civilization, every king and peasant, every young couple in love, every mother and father, hopeful child, inventor and explorer, every teacher of morals, every corrupt politician, every "superstar," every "supreme leader," every saint and sinner in the history of our species lived there – on a mote of dust suspended in a sunbeam.


Earth appears pale-blue partly because of sunlight reflecting from the surface, which is mostly open ocean. The ocean absorbs more of the longer wavelengths of light (such as red) than it does the shorter wavelengths (such as blue), which is why large bodies of water appear blue. However, Rayleigh scattering of sunlight by the atmosphere, which is what makes the sky blue, also contributes to making Earth appear blue from space. If the Earth had no oceans, Rayleigh scattering alone would give it a blue tinge.
Posted by Mostly Open Ocean at 2:45 PM