Many people, if they were asked "in which ecosystem would you find the highest diversity of species in the ocean?", would answer "coral reefs". And they'd probably be right. But there is another ecosystem in the ocean that is comparably diverse. Surprisingly, it's the deep seafloor.

Ecosystems that support high diversity are generally those that are spatially complex and have a high productivity allowing for a large number of niches that various organisms can occupy. In contrast to the high diversity habitats that most people are familiar with, the deep sea consists of energy poor, spatially uncomplicated mud flats. It was therefore expected that there would not be a high diversity of life in the deep ocean. However, in the 60's and 70's surveys of species richness in deep-sea sediments found that hundreds of species could exist in just a few square meters.

The deep seafloor is energy poor because no light reaches it and consequently there are no primary producers, except in rare locations like hydrothermal vents and methane seeps. The energy reaching the deep seafloor, therefore, comes almost entirely from the shallow oceans above where photosynthesis is possible. The detritus of the life above that trickles down to the deep is called marine snow. Very little of of the productivity of the shallow seas reaches the deep seafloor because most of the detritus is consumed before it gets to the bottom. 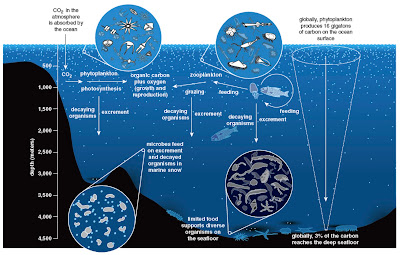 The source and fate of marine snow in the oceans.

One reason that has been proposed to explain the high diversity is that the marine snow does not fall evenly across the seafloor, but is variable in both space and time. This means that the amount of energy available to deep seafloor organisms is patchy and some species may be better adapted to different levels of energy availability. The reasons that marine snow is variable at large scales are depth (shallower parts of the seafloor receive more marine snow because there is less time for things in the water column to eat it before it gets to the bottom) and the productivity of the sea surface. Large and small scale water currents also play a role in the distribution of marine snow reaching the bottom.

Some studies published last year find support for the 'marine snow' hypothesis of deep seafloor diversity. Looking at small scales (1 - 350 meters), one  study1 found that samples taken close together were only slightly more likely to contain similar species that samples taken 350 meters apart. However, samples were more likely to contain similar species when they contained similar amounts of energy.

A third study3 also looked at the effect of depth, temperature and energy availability on deep seafloor diversity. This study, though, added a whole host of other environmental variables and looked at how dispersal ability affected diversity. This study again found that energy availability was the most influential factor influencing species distributions, but temperature was also important. Depth had an influence, but it was less important. None of the other environmental variables were very important, but dispersal ability was. 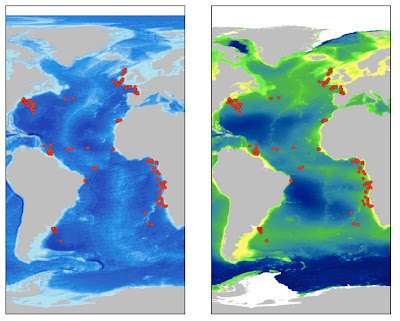 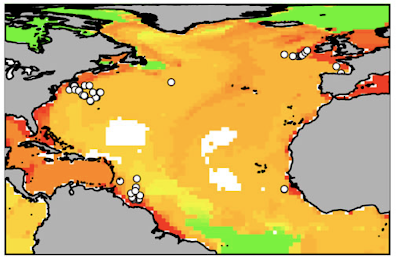 Maps showing the distribution of ocean depths (top left; lighter blues are shallower), marine snow (top right; yellows are higher), and temperature (bottom; redder is greater) in the study regions. The red points show the sampling sites from the third study, while the white are the sampling sites in the second.

These studies are interesting because they show that even in energy poor, physically simple environments there can be great spatial complexity. Indeed, small variations in just a few factors can explain a good deal of the amazing diversity of organisms living in the deep sea. And it's the small differences in the amount of marine snow reaching the seafloor in particular that seems to be most important in determining this diversity.